Is My Child a Bully? 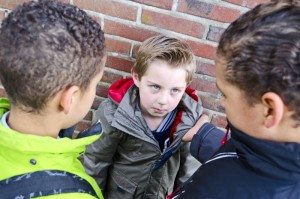 How horrifying is the proposition?

The mere thought that your child could be getting routinely tormented by one of their classmates brings up the worst feelings of sadness, vulnerability and anger.

But what if the shoe is on the other foot? What if your child is the one doing the bullying?

To me, that seems significantly worse.

After all, if your child is being picked on, he’s still a good kid. He’s just the victim of a bad one. But when your child is preying on his defenseless classmates for no discernible reason, suddenly you have to face the possibility that he’s… what?

These are terrifying thoughts for a parent, but given the fact that just about every child can point to at least one kid in their class and say, “That’s the one,” then obviously, there are a lot of us who are going to have to face this situation.

But deal with it we must. I don’t know if the problem has gotten worse since I was a kid, but if you read the news these days, chances are you won’t have to look too far to find a story where bullying has led to some terrifying, tragic circumstances.

So as much as I hope you never find yourself in the situation, here are a few things to consider if you do find yourself on the receiving end of a phone call from a concerned parent, calling out your child as the dreaded “B-word.”

You’re going to experience a flood of emotions all at once, so remember to breathe, stay calm, and resist the urge to get defensive. If you start freaking out and denying the suggestion outright, it’s only going to make the situation worse, and make you look bad in the process.

Even if your child’s accuser is being rude, even if you’re sure the accusations are unfounded, heck, even if they’ve got the wrong number, let the other person speak.

If they feel that the situation has gotten to the point where they need to confront you, they’re obviously pretty wound up, so let them tell you what happened, assure them you’ll speak to your child, get their contact information and promise to call them back afterwards.

If the idea that your child has been bullying other kids is inconceivable to you, you’re not alone. I read a great article from NBC News that pointed out a lot of interesting reasons why parents are so reluctant to believe their kids might be abusing their power.

But even if you’re 100 per cent convinced that your child is getting unfairly labeled, try to appreciate the situation the other parent is in. Chances are, they’re equally sure that their child is being harassed. The only effective way through the situation is through calm, open-minded communication.

I don’t know about you, but my kids are pretty accustomed to the, “You’re in trouble” routine. That’s the one they get for tearing around the house, eating on the sofa, or yelling at their siblings.

Taking them into another room when they get home and saying, “Sit down, honey. I really need to talk to you about something, and it’s very important,” communicates the fact that this is not just about run-of-the-mill bad behavior.

If it turns out that your child has, in fact, been bullying other kids, there are a whole bunch of ugly questions that are going to pop into your head.

How could I have missed this? What did I do to cause it? Where did I go wrong?”

Well, if you’re opposed to the use of intimidation and oppression, and if you’re actively trying to remedy the situation, then let me just answer all three of those for you, in order.

Easily. Nothing. You didn’t.

There are all kinds of reasons why kids pick on their peers, and many of them have nothing to do with their parents or their home life, so don’t be too quick to turn the camera on yourself. 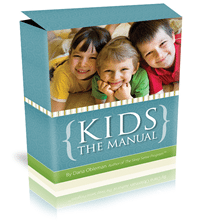 Young kids are in a perpetual state of experience and discovery. Sometimes they experiment with behaviors that we, as adults, know to be wrong. If you’re having trouble guiding them through these turbulent periods, I suggest you check out Kids: The Manual. It has plenty of great advice on issues like fighting, tantrums, whining and many other common behavioral problems parents face with young children.

The article I linked to earlier ends with a great quote from Rosalind Wiseman, the author of Queen Bees and Wannabes, where she says, “We are on the long road to making decent human beings.”

That’s parenting in a nutshell.

"I would like to say a huge "Thank You" to you. Your system is well explained and well researched and had worked wonders in our house. It is like Hannah is saying "Thank you Mommy - I really needed this", she is so happy since we began."

"Why didn't we try this sooner? As we speak he is sound asleep in his crib - and has been since 7:15pm. We are so pleased to get the evenings to ourselves again, and Tinius - who has always been a very happy boy - is even more happy now!"

"I ordered the sleep sense program and had wonderful results.
Tyler slept through the night without any crying by the second night.Thank you for the information, it really helped!!"

"I must say the program is nothing short of a miracle...our little baby was 5 1/2 months when we did it... and it's changed all of our lives. I didn't have much faith to be honest... but it all unfolded as your book indicated, much to our delight. Ryder sleeps through the night and naps like a baby!